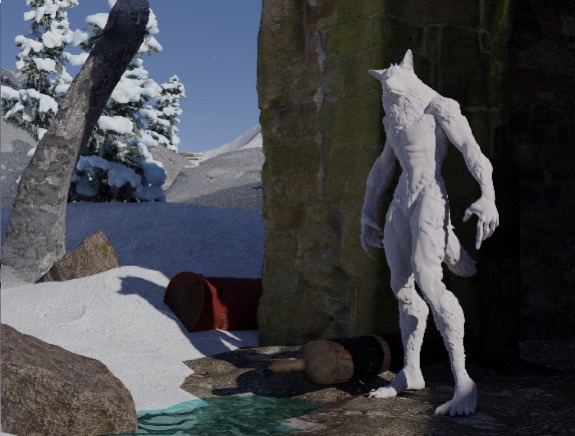 A victim of the wrong place, wrong time, and perhaps most importantly, the wrong race, Cecil was found in a ditch by a squad of Companion Peacekeepers. Cecil ended up there after he leaped for cover when a hoard of bandit Cynocephalus were escaping a village they recently raided.

Begin a Cyno himself, Cecil was naturally assumed to be one of the bandits who had simply fallen off his mount. Being a vagabond dressed for surviving in the wild made him appear suspicious (especially with a rifle on his shoulder, pistol on one hip, and axe on the other).

For his guilt of association, Cecil was sentenced to 20 years in Bettergreen Prison. It’s the largest and most notorious Companion prison in all of Ki. For a Cyno who was already 27 years old, this was essentially a death sentence given Cynos’ short lifespans.

Unable to speak human languages, Cecil has had to survive through using what little he knows of sign language and his natural physical prowess (given he’s a Cynocephalus). Although the prison would routinely enforce the filing down of all Cyno claws (as they are naturally essentially shivs), Cecil had been doing this while he was free for a long time anyway. He already knew how to fight without his claws.

That’s something that couldn’t be said for the rest of the Cyno population in Bettergreen, which was lucky for Cecil. They hate him the most.